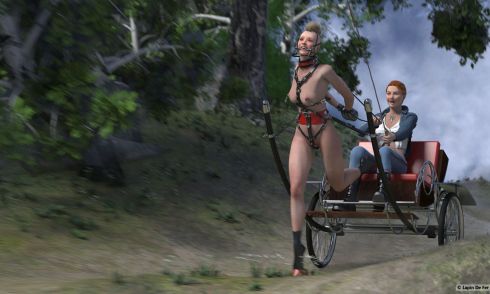 It has been over half a year since the last chapter of Pony Boot Camp, so it is high time to get back in the saddle. To kick things off again, I gratefully accepted a special offer from LapinDeFer, a 3D artist and connoisseur of all things pony.

Of course it was only a matter of time for our paths to cross, and he suggested to post his work Taken for a spin on my Word Press site. After some minor modifications it became Village Road. I had suggested a pony tail for the jockey (“not that kind of pony tail”) since she’d looked like having a bad hair day. And as this train of thoughts took up speed, my upcoming story Bad Tail Day was born.
END_OF_DOCUMENT_TOKEN_TO_BE_REPLACED

The one tacking me was of course Miss Cuntling – I don’t know why I even bother mentioning this explicitly. Soon I was tall on my hooves and ready for my harness with the high-collared leather yoke. For the ensemble an upgrade in form of a new crotch strap was available. Kandrin made sure I saw her fitting it. Replacing the simple belt was a length of braided leather, partly split like its predecessor. Somehow, in my capacity of deputy kit manager, my first thought was that the interwoven design would be difficult to clean. Those worries were quickly pushed aside by the prospect of multiple sharp leather edges working between my legs. END_OF_DOCUMENT_TOKEN_TO_BE_REPLACED

Playing with the Cool Kids

Right now, she was leading our party of seventeen sulkies, she herself being led by Kendrick’s firm yet knowing hand. He had switched carts (but not ponies) at the last minute because something at his seat had cracked and couldn’t be fixed in a trice. It could still carry Kandrin, though, who would literally be half his weight whilst carrying a knapsack full of bricks. So it came to pass that Fifteen found her slender self harnessed to the first sulky in line. END_OF_DOCUMENT_TOKEN_TO_BE_REPLACED

I didn’t sleep well. My sexy new piercings made my flesh throb constantly, and the blanket hurt whenever it rubbed across them. Half the night I lay awake, listening to the tossing and groaning from the other bunks. The morning wasn’t noticeably better, giving the crying fit I had upon seeing my septum-ringed face in the mirror. It didn’t instil much hope for the rest of the day, especially with pony training lurking at 09:30.

“Ah, there you are,” Kendrick greeted me as though we had arranged to meet for lunch. He pulled me out of my group as soon as I had taken my clothes off in the tack room. Then the lead handler also grabbed Ten and Fifteen for good measure. END_OF_DOCUMENT_TOKEN_TO_BE_REPLACED

Under my hooves the ground changed towards a more bouncy, less cushioning nature. My perfectly executed high steps caused hollow sounds, and the wheels of the sulky began to rattle in a distinct frequency. That, and the intensified noise of flowing water told me I was crossing the old wooden bridge. It was the first time Miss Cuntling had made me take this route instead of the trail that led upstream towards the Deepfall. I’d love to describe the scenery as I trotted deeper into the woods, but Kandrin had opted for the full blinkers. No distractions from the rein commands. And since this measure alone wasn’t sufficient to solve my alleged attention span problem, Miss C. had done what she liked to do best: She’d fitted me with a new bit. END_OF_DOCUMENT_TOKEN_TO_BE_REPLACED

First thing after the big morning fall-in was corral training. For reasons nobody had bothered revealing to us we were to be fitted with full tack right from the start – which paved the way for another gratuitous dressing scene. As Kendrick pulled my crotch strap tight, I went on the tips of my toes – or, given that I was already standing en pointe, on the tips of my hooves. From another corner of the tack room our resident pervert glanced over whilst continuing the tedious task of lacing up Eleven’s monoglove. Creepy Chap might hold strange beliefs when it came to romantic interactions, but he knew a randy pony if he saw one. END_OF_DOCUMENT_TOKEN_TO_BE_REPLACED

By now more ponygirls had arrived to be readied for a little tour. Handlers were busy harnessing them to the carts. A tall and thin tomboy with scraggy black hair caught my attention in particular. 1310, if I wasn’t mistaken. Despite being snugly embraced by tack her lean body still managed to show off the elaborated tattoos running intricately along her limbs and down her back and sides. The dark inkings went disturbingly well with sturdy leather. END_OF_DOCUMENT_TOKEN_TO_BE_REPLACED

They walked us behind the barn to a concrete area with taps and gutters. Giving us a real shower was out of question due to our leather tack, so the handlers quickly sponged us down. I should have been thankful for the clear cool water, but I could not lose the impression that they were actually grooming us in some form – which was rather creepy. END_OF_DOCUMENT_TOKEN_TO_BE_REPLACED